Since 2016, María San Miguel and Galen Fraser have been teaching and performing together non-stop and at some of the worlds most acclaimed traditional music events. These events include Celtic Connections, Folkomillas, North Atlantic Fiddle Convention (NAFCO), The Barcelona Fiddle Congress, TON Medelpads Folkmusikförbund, Valley of the Moon Scottish Fiddling School, Centro Artesano Tradicionàrius (El CAT) and many more.

“With violins, cittern and voices, the Castilian artist María San Miguel and the composer Galen Fraser, born in California and connected familiarly with Scottish and American folk, go up to the CAT stage for the first time, to present a project which connects them to the traditional music they understand as a social and cultural evolution. "For us the message is to show how we are, all cultures have traumas that have had to be overcome, it is what we have to accept, there are sad aspects but we must also celebrate it to keep moving forward," says the artist , a benchmark in the contemporary development of the new tradition of Castile. The two protagonists have an international projection and have performed in various concert halls, music cycles and festivals in Europe and the USA.”

A little bit about María... 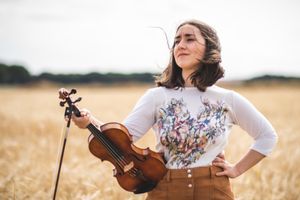 Neo-traditional violinist and a reference in the contemporary development of the new tradition in Castile. María's purpose is to connect society with its roots, through traditional music, for a more prosperous development. She studied violin at the Conservatorio Superior de Salamanca and at the Musikhoch-schule in Detmold (Germany), but her world of inspiration was always folk music, where she has developed several projects such as, “Atlantic Folk Trio”, “CastellanAs”, “ Brigantia ” and "Fraser San Miguel"

.
María is also passionate about the world of teaching. She has been an invited guest at folk music courses in many different countries to transmit the energy and message of Castilian music!

A little bit about Galen... 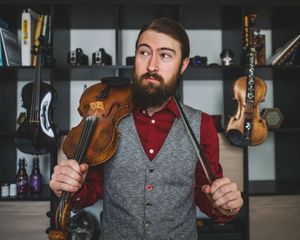 A dreamer and spokesperson for the power of self-expression. Galen is a half-Scottish, half-American graduate of the esteemed contemporary music school, Berklee College of Music. Following in the footsteps of his musical father, he aims to bring people together through thrilling original compositions and a deep sense of community and respect